Generally speaking, when going to court as a witness, people are prepared to raise their right hands and swear an oath on a holy book to tell the truth. But this isn’t the only way to do it. 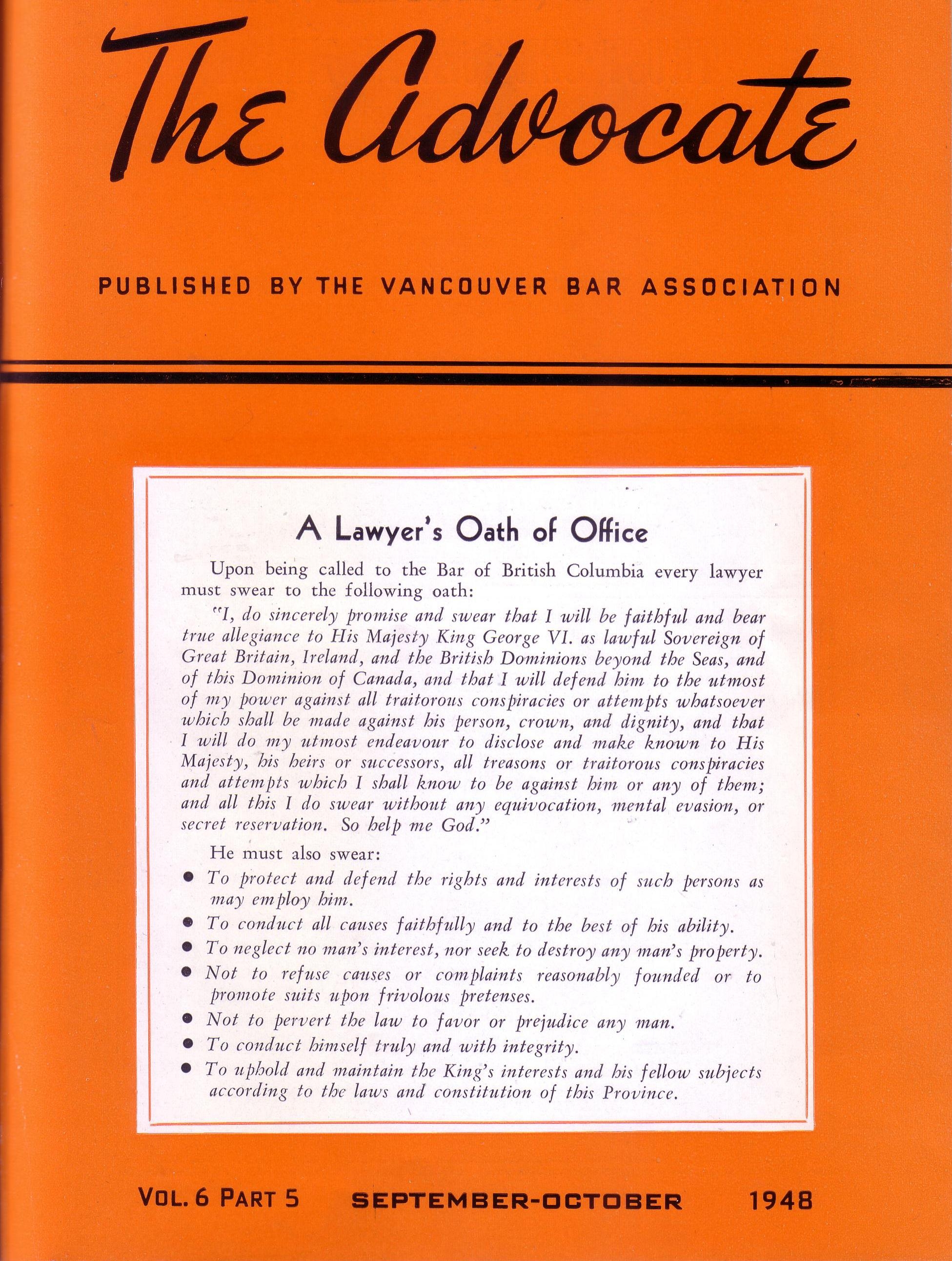 A century ago, the chicken oath was used primarily by those of Chinese descent in British Columbia.  The oath involved the witness signing his name on a piece of paper, followed by a ceremony outside the court in which a rooster's head was chopped off on a block and the paper oath was set on fire.

For example, according to the article “The King’s Oath or Chicken Oath”, in 1895 a grocer on Vancouver Island, Simon Leiser & Co., submitted an invoice to the local government for several chickens and a knife supplied to an H.A. Simpson for a trial at Union, BC. The government declined to pay the bill because Mr. Simpson was acting on behalf of the plaintiffs.

A 1965 article in The Advocate states that "[c]olourful rituals ought not to come as a surprise since the Oaths Act of 1888 gives wide scope allowing witnesses to take the Oath in any form and with such rites as bind their own conscience."

Other non-Christian Chinese oaths consisted of the candle oath (whereby the witness holds their hand over a lit candle while swearing the oath and then extinguishes the flame), the saucer oath (when the witness breaks a saucer and then swears to tell the truth) and the paper oath (the witness signs their name to a piece of paper and then burns it).

"Indeed counsel in one case expressed relief that a particular Chinese witness felt bound by the saucer method.  Some Chinese, he pointed out, require a white cockerel to be slaughtered in court.  But even saucers can cause problems.  When 20 Chinese turned up as witnesses at an East London county court the proceedings had to be held up while the court usher scoured local crockery shops."  ...

"Colonial Magistrates used to encounter many strange customs. ... [I]n North Kenya some tribes used to bite skin from a live dog and say 'as I bite this dog, so may I be eaten if I lie.'  A Masai presented the court with cooked rice decked with seven yellow solanum berries.  In Tanganyika a member of the Akimbu tribe once held a deadly puff adder before his face saying, 'If I am going to tell lies may this snake kill me.'  The snake did not.  Nevertheless, the tribesman lied heartily and was jaoled for perjury."

According to Donkers v. Kovach, State of Michigan, Court of Appeals, File No. 270311, December 18, 2007 (p.6), the origin of raising the right hand dates back to Roman times.  The penalty for perjury was a brand on the right hand.  Thus, if one was taking an oath, one would be required to raise the right hand to show that s/he had not been convicted of perjury in the past.

In England in the Middle Ages, a religious oath was used to exclude non-Christians from participating in the English legal and business communities.  Eventually, however, the English legal system began to accommodate these differences by allowing non-Christians to swear on a sacred text to any Higher Being which they believed would bring divine punishment if they committed perjury.

See Our Legal Knowledge Base answer on oaths for more uncommon oaths.

The current oaths used in Canada are essentially the same as those historically used in Britain.

J. de Villiers, in his article "Oath or Affirmation? Or Neither?", argues "[I]n practice in our courts (at least in matters under the jurisdiction of the federal Parliament) it is assumed that witnesses will take the oath in conformity with Anglican ritual unless they expressly elect either to take an oath in conformity with some other religion or to affirm."  ...

"It is left to the witness to express spontaneously the wish to swear in some other manner or to affirm.  The practice assumes that an oath is preferred over an affirmation and that the Anglican oath is the preferred form of oath.  Thus it discriminates against Quakers and other non-Anglican religious people as well as agnostics and atheists."

However, the BC Evidence Act, RSBC 1996, c 124, sections 21 to 22 discusses the validity of the oath regardless of absence or difference of religious belief, as well as oaths administered by uplifted hand.

As recently as 1993 in R. v. B. (K.G.), [1993], 1 SCR 740 at 789, the Supreme Court of Canada said: “There remain compelling reasons to prefer statements made under oath, solemn affirmation or solemn declaration.  While the oath will not motivate all witnesses to tell the truth (as is indicated by the witnesses' perjury in this case), its administration may serve to impress on more honest witnesses the seriousness and significance of their statements, especially where they incriminate another person in a criminal investigation.”

There are records of several cases where the chicken oath was administered in Canada:

"The Art of Swearing a Resounding Oath".  The Advocate (1965) 23:95.  (available in Vancouver and regional courthouse libraries)